Legends of the Hidden Temple Wiki
Register
Don't have an account?
Sign In
Advertisement
in: Episodes, Season 1, Layout VIII,
and 15 more

Pecos Bill's Lost Lariat is the 35th episode of Legends of the Hidden Temple. It was the 17th episode to air.

Among cowboys in the Old West, the greatest legendary hero of all time was Pecos Bill. One stormy day, all the cowboys were sitting around the bunkhouse, and as usual, Pecos Bill was bragging that he could ride anything, no matter how wild.

One of the other cowboys said, "There's a twister brewin' outside. I'll bet you a silver dollar you can't ride that."

Everyone laughed, but according to legend, Pecos Bill got up, went out into the storm with his lariat, and roped the twister. When the cyclone touched down, he jumped on its back and held on for dear life. It bucked and romped over three different states, and finally, tired out, it turned into a rainstorm in Arizona. There was so much rain that it created the Grand Canyon. When Pecos Bill crashed to the ground in California, he hit so hard, it created Death Valley.

The Green Monkeys are 11-year-old Colleen Johnson (now Dunlop), who was a former student council president, and Chris (also 11 years old), who is a little league pitcher. The Blue Barracudas are 12-year-old Hank, who studies foreign cultures (his favorite being the Greek Culture), and 13-year-old Janelle (aka "Little Magic"), who can do a perfect horse impression. Kirk mistook the Blue Barracudas as the "Blue Horse" after hearing Janelle's horse impression.

Pecos Bill lassoed a twister that took him on a wild ride, but they thought they should start something a little bit tamer like those walls. On the floor were four fastened ropes. When Kirk said go, they climbed up, fastened the rope to the top of their walls, then they climbed back down, grabbed their next ropes, and fasten them to the top. The first one to warp the wall by fastening all four ropes to the top or the one that's furthest along in 60 seconds won. Hank caught an unlucky break when one of his ropes fell, so Chris won the first half pendant after attaching two ropes while Hank was only able to attach one.

Legend has it that Pecos Bill invented branding. Most cows don't care much for being branded. so they thought they'd had the players brand the posts instead. When Kirk said go, the players grabbed brands from the center bin, crawled out to the posts, and placed them on them. Then they went back to the center, grabbed the next brand, and then brought them out to the posts again. They each worked on two posts and the first one to brand both posts twice in 60 seconds won. Janelle managed to brand each of the posts with 24 seconds remaining on the clock.

You're probably familiar with that old cowboy saying, "Cattle should be seen in a herd." They think it's about time you prove it. Before the teams were a bunch of cows grazing on the open range. When Kirk said go, one player from each team slid down on their bellies and then, in each hand, grabbed two cows, went to the end of their ramps and dropped them into their buckets. Then it's their partners turn. They alternated that way for 60 seconds. Whichever team has the most cows in the bucket won and they won a full pendant. The Green Monkeys beat the Blue Barracudas by two seconds and won the full pendant of life, sending them to Olmec's Temple with 1½ pendants.

Colleen dashed into the Room of the Royal Gongs where she unlocked the door that leads down to the Troubled Bridge after hitting the first gong. She then races up into the Observatory and spins the celestial lights, but hesitates for a moment as she believes that the door to the Treasure Room has opened. However, she decides to descend into the Heart Room instead. While she is doing this, it is revealed to the audience that the door to The Treasure Room did open. She encounters her first guard in the Heart Room, and is then taken out of the temple by a second temple guard with 2:24 remaining on the clock.

Chris slowly makes his way towards the Treasure Room where Colleen was taken out. He runs into the Shrine of the Silver Monkey, where he slowly assembles the monkey. He then races into the Room of Three Torches where the bucket to the Well was ready to descend. However, Chris wastes time trying to complete the Torch Room objective when all he has to do is sit in the bucket. When he finally realizes he can jump into the bucket, he slowly descends into the Well and has a little trouble grabbing the lariat. Once he does find the lariat, he starts climbing back up to the Shrine. However, Kirk tells Chris to bust through the Stone Wall, in which Chris does. Chris is not able to make it out with the lariat in time, although he obtained his other half-pendant in the Throne Room along the way. 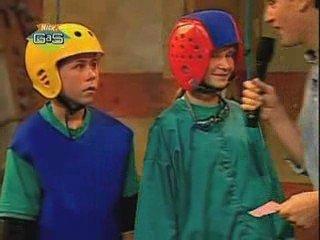 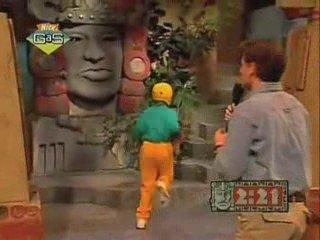