Start a Wiki
The Crown of Queen Nzinga is the 67th episode of Legends of the Hidden Temple. It was the 58th episode to be aired.

One of the greatest African leaders in the 1600's was the Queen of the Ndongo Tribe, Nzinga. When she was young, her brother sent her to make a treaty with the Portuguese Governor in Luanda, the capital of modern Angola.

"Be strong," he said, "because the Portuguese are treacherous."

When she arrived, the Governor, on his throne, waited for her to speak. "Do you not offer me a place to sit?" asked Nzinga.

"That is for equals," said the Governor. "You are not my equal."

"I am an emissary of the King of Ndongo, and I am your equal."

Nzinga clapped her hands, and one of her attendants knelt down on all fours. She sat on his back and proposed a treaty. By the end of her visit, they made the treaty on her terms. When her brother died, Nzinga became queen, and for over thirty years, she kept her people free. Legend has it that her grateful subjects treasured her crown long after she died.

The Purple Parrots are Tracy, who wanted to be a technical engineer and does gymnastics, and Robbie, who is interested in paleontology. The Red Jaguars are Benjamin, who does basketball and water skiing, and Renee, who plays tennis, wanted to be a doctor, and does dance.

In Queen Nzinga's time, many Africans worshiped animals - some even worshiped snakes like the giant ones before Benjamin and Tracy by bringing it offerings of jewels. When Kirk gave the signal, each player had to grab a jewel, shinny up the snake's body, and place it on its hood. For each jewel placed, he/she had to run back to the starting point and start again. They had to hold on very tight as the snakes would be squirting them. The player with the most jewels on the snake's hood in 60 seconds won. Benjamin won the game after placing three jewels on the snake's hood, awarding him a half pendant of life.

When her brother died, Nzinga was crowned queen by the Ndongo people. Renee and Robbie's task was to crown themselves not once, but four times. When Kirk gave the signal, each player had to grab a rope in each hand and pull themselves up to the crowns on the ceiling. Once at the top, they then each had to grab a crown, place it on their head, and float back down. The player to bring down all four crowns or the player to bring down the most crowns in 60 seconds won. Robbie won the game after getting three crowns, awarding him a half pendant of life.

Queen Nzinga kept the Portuguese out of her country for over thirty years. The teams' task was to defeat the army before them just like how Nzinga defeated the Portuguese. One player was suspended in a sack, and when Kirk gave the signal, his/her partner had to swing them at a soldier statue. The team to knock down all three of their soldiers or the team with the most soldiers knocked down in 60 seconds won. The Red Jaguars knocked down their last soldier with 19 seconds of spare time, awarding them a full pendant of life and sending them to Olmec's Temple with 1½ pendants.

Benjamin started in the Crypt. He failed to pull all of the books and headed down into the Ledges. He continued on the bottom floor and met back to back temple guards in the Laser Light Room and the Swamp. Renee followed Benjamin's path directly. However, while entering the Dark Forest, Renee passed up the half pendant and was captured by a temple spirit. 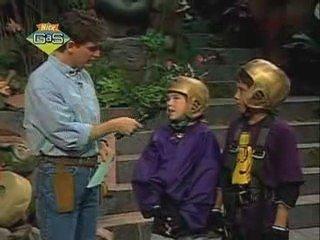 The Crown of Queen Nzinga Part 1

Retrieved from "https://legends.fandom.com/wiki/The_Crown_of_Queen_Nzinga?oldid=29057"
Community content is available under CC-BY-SA unless otherwise noted.