Start a Wiki
The Levitating Dog Leash of Nostradamus is the 77th episode of Legends of the Hidden Temple. It was the 43rd episode to air.

The Moat for the last production day of Season 2 was a simple one; players just had to swing on a rope to get across. The Silver Snakes made it across almost instantly; the Blue Barracudas, Orange Iguanas and Purple Parrots needed a bit more time, but they made it across, locking in to form one of the rarest Steps of Knowledge color combinations in the show's history.

The most famous astrologer and prophet of all time was a French doctor named Nostradamus. He predicted many historical events, like the Second World War and the San Francisco Earthquake. The Queen of France relied on his predictions. Once when a page lost the queen's favorite hunting dog, he knocked on Nostradamus's door, hoping for help.

"But sir…" said the young man.

"I know, I know…You lost the dog. You'll find him on the road to Orléans, being led on a leash. Now beat it!"

"How does he do that?" thought the young page as he set out, running toward Orléans.

Sure enough, within an hour, he found the stray dog being led on a leash, just as Nostradamus predicted. Legend has it that the grateful queen had the leash gold-plated and gave it to Nostradamus as a token of her thanks. The night he died, the leash rose into the air, floated to Orléans and boarded a ship for the temple, where it floats still.

The Orange Iguanas are Jason and Elizabeth. The Purple Parrots are Kara and Christopher.

Nostradamus is famous worldwide for his psychic predictions. Everyone wanted to see how psychic Elizabeth and Kara are. In front of each player was the Fountain of Forgetful Waters which could emit a stream of water from one of its five holes. Each player held a psychic stopper. When Kirk gave the signal, each player had to plug the hole where she thought the water would appear first. If either player was right, nothing would happen. Otherwise, she would be squirted with the Waters of Forgetfulness. Then they would remove their stoppers and try again. The player with the most correct predictions in 60 seconds won. Elizabeth was more psychic with three correct predictions compared to Kara's two, awarding Elizabeth a half pendant of life.

Nostradamus was also a famous astrologer and he studied the stars when making predictions. Here, Jason and Christopher had to place some stars in the sky. When Kirk gave the signal, each player had to grab a star, jump up and hang it in the sky above him. Once either player came down, he then had to grab another star and do it again. The player who hung the most stars in 60 seconds won. Jason ended up with only one star, as he knocked two down. Christopher however won a half pendant of life with seven stars.

Nostradamus strongly believed that all people had predetermined paths that they were destined to follow. These predetermined paths decided the places they would go and the people they would meet. The predetermined path the players had to take in this game would cause them to meet their partners over and over again. When Kirk gave the signal, Jason and Kara had to place a ball between their feet, grab the trapeze, and Elizabeth and Christopher in the middle. When they met, they had to transfer the ball from one person to another. Once done, Jason and Kara had to swing back for another ball while Elizabeth and Christopher had to place the ball in their team's buckets. The team to complete the most transfers in 60 seconds won. Both teams tied with three balls in their buckets, awarding each team a full pendant of life, leading to a tie.

Olmec: "Which of these did Nostradamus find for the Queen of France?" Before Olmec could give the answers, Elizabeth rang in and correctly answered "Her lost dog", sending her and Jason to Olmec's temple in search of the levitating dog leash.

Describing the prizes, you could tell that even Dee Bradley Baker was pretty excited; he really sounded like he wanted to give away the CD player, travel gear and especially that trip to Cancún. The Temple Run itself proved to be appropriately exciting. Elizabeth was a pretty good player, evidenced by her trying all three doors in the Pit and signaling the half Pendant on the Laser Light actuator for her partner, but she did not last very long. She cleared the Crypt, Pit and Laser Light Room— where she met her first Temple Guard— before meeting her second in the very next room, the Room of the Mandarin Hand, with 2:03 remaining.

Jason found the half Pendant and made his way to where Elizabeth left off. The doors leading out of the Room of the Mandarin Hand did not open until he put the last finger on the globe, but he got lucky in the King's Storeroom and made good time in the Shrine of the Silver Monkey, allowing him to grab the Levitating Leash with 44 seconds left. Kirk seems pretty worried about Jason trying to cross the Pit, but Jason makes one of the smartest moves ever: grabbing the rope using the Leash. He then swung across into the Crypt and made it out with fourteen seconds left. Had he failed to cross the Pit, this probably would not have been a win. These two Orange Iguanas were both excited, and Kirk was genuinely excited as well; it really added to the Temple Run and helped make the entire episode one that is definitely worth watching. 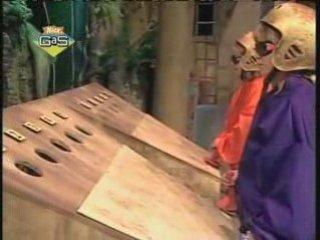 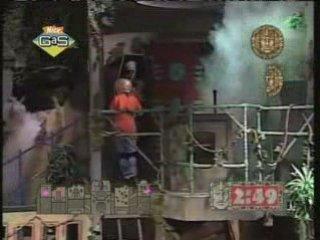 Retrieved from "https://legends.fandom.com/wiki/The_Levitating_Dog_Leash_of_Nostradamus?oldid=29822"
Community content is available under CC-BY-SA unless otherwise noted.