Start a Wiki
The Lion-Headed Bracelet of Chandragupta is the 85th episode of Legends of the Hidden Temple. This episode was also the 120th and final episode to air during the show's original run.

One person on each team must push their partner, who is on top of an "ancient raft" to the other side. If the player on the raft fell off or touched their partner, they must start over.

One of the greatest warriors of ancient India was Chandragupta, the first Indian emperor. In 323 B.C., he raised an army of over half a million men and conquered one of the largest empires in history. But Chandragupta never thought he'd be emperor. As a young man, he was a cattle herder, and legend has it that one night, as he slept in the fields with his friend, Jamba, and the herd, he felt a nudge.

"Leave me alone, Jamba! Is not time to get up yet."

"What're you talking about? I'm over here."

Chandragupta felt warm breath on his cheek and the nuzzle of a moist nose.

"Daisy, go away. It's too early for milking."

But if it were Daisy, his favorite cow, he would've heard her cow bell. Suddenly he sat full upright, and found himself nose-to-nose with an enormous lion. Terrified, he whispered to Jamba:

But just then the lion bowed his head to Chandragupta, and strolled away.

"It is a sign! He who the lion salutes is destined to be king!"

Indeed, the prophecy came true. Chandragupta adopted the figure of a lion for his golden bracelet which, years later, found its way to the Temple.

The Green Monkeys are Andrea, who wants to be an astronaut and enjoys swimming, and Shaun, who has a top three in sports consisting of rollerblading, swimming and street hockey. The Silver Snakes are Katie, who plays the clarinet and has a dog named Rascal, and Matthew, who plays ice hockey and wants to get a degree in law from the University of Michigan.

Chandragupta built one of the largest empires in history by conquering neighboring countries. When Kirk gave the signal, Andrea and Katie each had to climb up onto their wheels and adjust their weight to make the wheels spin. Each full rotation would represent one country conquered. If either player fell off, the spotters would stop the wheel so she can get back on and start spinning again. The player who conquered the most countries in 60 seconds won. Katie beat Andrea 13-9, awarding Katie a half pendant of life.

Chandragupta's armies rolled across most of Asia to curate the largest empires in history. Shaun and Matthew had to roll across Asia just like Chandragupta. When Kirk gave the signal, each player had to roll his wheel as quickly as possible to the first border of the empire and then roll back to the other border. The team to touch the most borders in 60 seconds won. Both players tied with seven borders touched, awarding each of them a half pendant of life.

To maintain control over the empire, Chandragupta started a complex network of spies who used to pass secret scrolls to each other. Before each team stood a secret web where the Indian spies would hide their scrolls. At the top, the blue scrolls are the most secretive and worth two points while the lower ones (which are brown) are worth one point. When Kirk gave the signal, each player had to run forward, launch him/herself toward the net, grab a scroll, drop down and place it in his/her team's bin. The team to gather all their scrolls or the team with the most points in 60 seconds won. Neither team gathered all their scrolls, so Kirk had to count up the teams' points. The Green Monkeys beat the Silver Snakes 8-7, awarding the Green Monkeys a full pendant of life, sending them to Olmec's Temple with 1½ pendants.

Andrea was a smart player, and she knew what to do in every room. It is a good thing she knew what she was doing, as she had to pass through seven rooms herself on the way to the artifact. In the King's Storeroom, she found the half pendant, and then signaled it to her partner in case he would need to go in--another smart move. She made it all the way to the bracelet with forty-four seconds remaining, and finished off the solo victory with six seconds to spare. She and her partner both won a trip to San Diego for their efforts through the show. 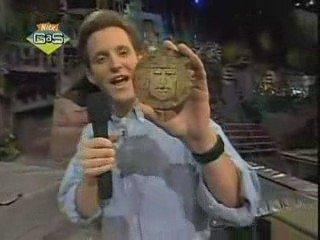 The Lion-Headed Bracelet of Chandragupta Part 1 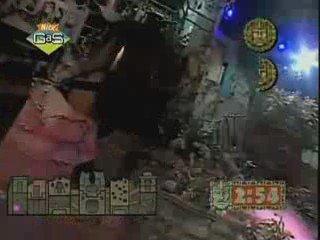 Retrieved from "https://legends.fandom.com/wiki/The_Lion-Headed_Bracelet_of_Chandragupta?oldid=29431"
Community content is available under CC-BY-SA unless otherwise noted.