Start a Wiki
The Lost Hornpipe of the Pirate Captain is the 103rd episode of Legends of the Hidden Temple.

Players from each team must individually run and dive onto a long plank with enough speed to reach a rope toward its end which they can use to pull themselves in. If any player stops without being able to reach the rope, falls into the water, or touches the side, he or she is sent back to try again.

One of the youngest, yet boldest sea captains of the 1800s was captain John Greenwood. At only 21, he became captain of his own ship and set off on his first voyage. But soon, he and his men were overcome by Joseph Wheeland, the most treacherous pirate on the bounding mane. Greenwood’s crew was terrified, but Greenwood never lost his nerve.

"Take the ship, but let my men go free!"

And he took out his dreaded hornpipe.

"You’ll all be dancing the last hornpipe jig from the yardarm by morning. Take em below!"

The pirates towed the ship in the midst of their pirate fleet, and only Wheeland and three mates stayed aboard with Greenwood to count their booty.

"Toss that crate over there, ya lubbers. Captain, what cargo are you carrying?"

"I can’t remember, but I've got a list if you'll take me to the cabin."

As the greedy pirates gathered around the list, Greenwood backed away and locked them in the cabin. He threw the mate on deck overboard. The pirates on the surrounding ships began firing on him, but Greenwood ran through the whizzing musket balls, cut the ship free, and sailed away before they could stop him. Joseph Wheeland went down with his ship, but his hornpipe washed ashore at the temple.

The Green Monkeys are Jessica, who wants to be an actress and collects cow-related stuff, and Jarrid, who is an actor and also loves to draw. The Purple Parrots are Mary, who does cheerleading, and Brent, who collects bags and enjoys country music.

With Joseph Wheland locked in the cabin, John Greenwood hurled the sacks of cargo at the crew, sending them overboard; between Brent and Jarrid were giant sacks of cargo, and behind them were four pirates. When Kirk gave the signal, both boys would push the cargo to knock out the pirates while staying in their designated zone; whoever knocked out all four pirates within 60 seconds would win. Brent got all four down with 31 seconds remaining, awarding him a half-Pendant.

To keep the ship's keel safe and clean, crew members would swim below and pull off barnacles; fortunately for Jessica and Mary, their ship was in dry dock. When Kirk gave the signal, each girl would crawl out, grab a barnacle and return to drop it in their bin; whoever got the most barnacles within 60 seconds would win. Jessica and Mary tied with four barnacles in their bins, giving the former a half-Pendant, and the latter a full Pendant.

John Greenwood ended the attack by crashing through Joseph Wheland's ships; here, the teams would sink a fleet of three using the girls in sacks suspended from the crow's nest. When Kirk gave the signal, the boys would swing them to sink the ship by knocking it over, and whoever sank all three within 60 seconds would win. The Green Monkeys finished the job with 40 seconds remaining, sending them to Olmec's Temple with 1½ pendants. 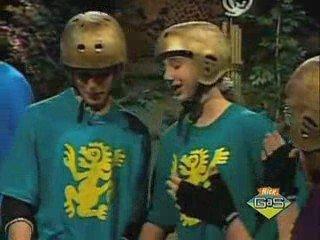 The Lost Hornpipe of the Pirate Captain Part 1 Retrieved from "https://legends.fandom.com/wiki/The_Lost_Hornpipe_of_the_Pirate_Captain?oldid=29849"
Community content is available under CC-BY-SA unless otherwise noted.