Start a Wiki
The Much-Heralded Helmet of Sir Gawain is the 84th episode of Legends of the Hidden Temple. It was the 99th episode to be aired.

The teams had to use the ruins of "ancient swinging bridge". Each team had one player get on first then the other and so on until they crosses the moat.

Steps of the Knowledge

One of the bravest and most valiant knights of King Arthur's legendary Round Table was Sir Gawain. Though the youngest and not the smartest of the Knights, Gawain had one advantage -- his magical silver helmet, which even Merlin the magician desired because its powers were even greater than his own. Legend has it that one afternoon, King Arthur's wife, Guinevere, approached Gawain in the Royal Garden at Camelot.

"Sir Knight, someone has stolen the stained glass window from the Royal Chamber."

But Guinevere persisted, and at last Gawain agreed to search for the stolen panes. Scouring the palace, he came across a scullery maid crying in the vestibule.

"I've broken Her Majesty's window, and I will surely be thrown in the dungeon."

"Nonsense. At worst, you'll be thrown in the moat."

Moved by her tears, Gawain pleaded with Merlin, who waved his magic wand and restored Guinevere's window for a price. The price was Sir Gawain's magical helmet, which later found its way to the temple.

In our legend, Sir Gawain searched all the floors of the palace for the broken stained glass window. Before Tiffani and Donna stood the palace of King Arthur with two stained glass windows at the top (one of which, is broken). When Kirk gave the signal, each player had to jump up and climb through to the next floor of the palace. Once at the other side, she had to do it again. When either player reached the top, she had to replace the broken window with the new one and climb back down. The player to replace the window and make it back to the starting point in 60 seconds won. Donna made it back to her starting point with 24 seconds remaining, awarding her a half Pendant of Life.

As the best warriors in the realm, the Knights of the Round Table had to remain in tip-top shape, so they jousted or sparred with giant swinging maces like the ones Jahmel and Josh saw before them. Below each foam mace were four shields. When Kirk gave the signal, each player had to run out, grab the first shield, and bring it back and drop it in his bin without being hit by the mace. Then, they had to run out to grab the next shield. The player with all four shields in his bin or the player with the most shields in his bin in 60 seconds won. Jahmel dropped his fourth shield in his bin with four seconds remaining, awarding him a half Pendant of Life. Josh had all four of his shields in his bin, but the fourth one did not count.

Teams of the Round Table (Tilt Swing)

Sir Gawain was one of the knights of King Arthur's famous round table where the knights met and ate. Someone had to set and clear that table. Olmec: "And today that someone is you!" When Kirk gave the signal, one player on each team had to run around, jump up, and grab a golden chalice and drop it into his/her team's bin. At the same time, his/her partner would be doing the same. The team that collects all their chalices or the team with the most chalices in their bin in 60 seconds won. The Orange Iguanas had eight chalices in their bin, awarding them a full Pendant of Life, sending them to Olmec's Temple with 1½ Pendants of Life. The Purple Parrots had three chalices in their bin.

Tiffani might have given a stupid answer at the Steps of Knowledge and absolutely bombed her solo Temple Game, but she definitely made up it where it mattered. She was not the fastest player, but she had an excellent concept of what to do in every room she entered. She even made it back onto the platform after knocking over the column in the Pit of the Pendulum, and if it were not for that, the outcome of the run would have probably been very different. Tiffani made it into the Chamber of the Sacred Markers, where, oddly enough, the lights flashed when she completed the objective but the door leading upward did not open. (Whether the producers thought the lights were supposed to flash even though the door upwards did not open, however, or even if Tiffani was supposed to meet a guard hiding behind the door— it did not ALWAYS happen just because the door opened— is pretty unclear, but the door never opened during the run— however, that does not prove it was supposed to when she put all the tiles in place.) Tiffani tried all three armors in the Room of the Ancient Warriors, did a fair job putting the monkey together and smartly went down into the Dark Forest with plenty of time to spare.

Tiffani found the key and ended up grabbing the Much-Heralded Helmet with a whole 53 seconds remaining. The team still had 1½ Pendants when Tiffani grabbed the Helmet— they never encountered a single Temple Guard! And it is a good thing, too, because even a single guard would have seriously slowed them down. Tiffani needed as much time leftover as possible to get out, since the Much-Heralded Helmet of Sir Gawain was one of the largest and heaviest artifacts they ever had on the show. It took Tiffani a long time to get out with it— she even stumbled and audibly grunted trying to go across the lower floor of the Pit of the Pendulum with it— but eventually she made it to the pitch-black Ledges. It took her a while to get out, but eventually climbed up into the Crypt, headed down the stairs and recorded an amazing solo win with 12 seconds left. Tiffani was exhausted afterwards, but she and Jahmel, who was a very supportive teammate from the sidelines, were very excited about the victory. They each won a Magna bike, a Magnavox TV and a vacation to the Bahamas, and it only took one player to get it all. It was a very exciting run, and it definitely shows the good side to the Temple Run being so different from the preceding rounds. 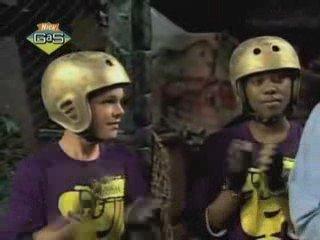 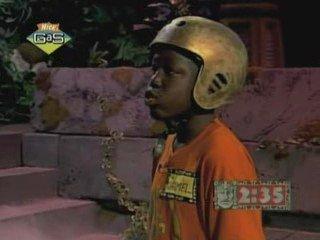 Retrieved from "https://legends.fandom.com/wiki/The_Much-Heralded_Helmet_of_Sir_Gawain?oldid=29839"
Community content is available under CC-BY-SA unless otherwise noted.