Start a Wiki
The Royal Torque of Queen Boadicea is the 102nd episode of Legends of the Hidden Temple. It was the 86th episode to be aired.

Players from each team must individually run and dive onto a long plank with enough speed to reach a rope toward its end which they can use to pull themselves in. If any player stops without being able to reach the rope, falls into the water, or touches the side, he or she is sent back to try again.

One of the most courageous leaders of Ancient Britain was Boadicea, Queen of the Iceni. For a time, the Iceni were under Roman Rule, and their governor, Suetonius was a harsh ruler. One day, Boadicea could stand no more. She put on her royal torque, a golden necklace and gathered the Iceni together.

"Reverend, the Romans have mistreated us long enough! Let us take up arms and drive them out of our land forever!"

"Yes, down with the Romans!"

The people cheered and took up their arms. The marched toward London, others joined them along the way. By the time they reached the city, they were a huge army, and at their head rode Boadicea in her chariot with her long blonde hair flying. They drove the Romans from the city and burned it to the ground. Boadicea became Queen of all of the Britains. Legend has it that during the battle, the Royal Torque of the Iceni was torn from Boadicea's neck and vanished. Some say it was found by a faithful tribesman who kept it for years before bringing it to the Temple.

Led by Boadicea, the Britains destroyed the Roman city of London. Like them, teams are about to face off. Behind each team stood the towers of their city and between them were giant boulders which ancient armies used to destroy towns. When Kirk gave the signal, Nate and Chris each had to push their boulders to knock down their opponent's towers. Nate won 3-0.

Boadicea's army marched day and night and swept into London like a fierce wind driving the Romans before them. Even the teams are going to march to London. When Kirk gave the signal, Lissy and Jeannie each had to climb onto the wheel before them and adjusting their weight to make the wheel spin. Each time either of them rotates the marker on the wheel one whole time, it will represent one more mile they have traveled toward London. If either of them falls off, the wheel will stop and they will get back on and start spinning again. The team who marched the most miles won. Lissy won 10-8.

In preparation for Boadicea's attack, the Romans gathered huge piles of boulders to reinforce the walls of the city. Before each team were a pile of boulders, which have removed the city wall. When Kirk gave the signal, each player had to grab a boulder and throw it onto the chute above them. When it rolls off the other side, the second player had to catch the boulder without it hitting the ground and place it into the bin and then go on to the next one. The team with most boulders in their bin won. The Red Jaguars won 4-0.

The frontrunner, Lissy, started off quite well, but was removed from temple in the Chamber of the Sacred Markers after completing the objective. Then it was Nate's turn. He was a fast player, and had a good map of the temple in his head. He followed the top path, took the Shrine/Dark Forest passage, and quickly made his way to the Tomb of the Headless Kings. He grabbed the Torque with only fourteen seconds to go. Because he felt it would be quicker, he climbed up to the Chamber of the Sacred Markers, but time ran out while he was midway through The Pit of the Pendulum. 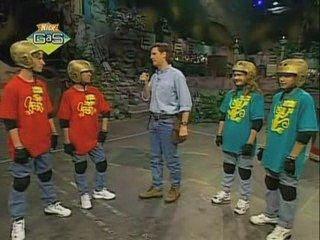 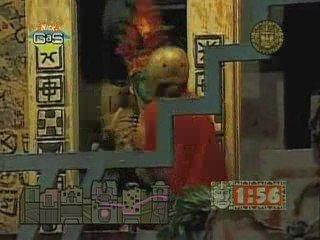 Retrieved from "https://legends.fandom.com/wiki/The_Royal_Torque_of_Queen_Boadicea?oldid=29782"
Community content is available under CC-BY-SA unless otherwise noted.