Legends of the Hidden Temple Wiki
Register
Don't have an account?
Sign In
Advertisement
in: Episodes, Season 2, Layout XII,
and 16 more

The Sacred Ring of Sultan Suleiman

The Sacred Ring of Sultan Suleiman is the 61st episode of Legends of the Hidden Temple. It was the 71st episode to be aired.

One of the most powerful and feared women of the 1500's was Roxelana, Sultaness of the Ottoman Empire. She was a harem girl who became so powerful, she began a line of women rulers that lasted 100 years. Legend has it that one day, she came into the Throne Room.

"Suleiman..." Roxelana said, "I have a little favor to ask you."

"Sire..." said the Grand Vizier, "This woman has bewitched you. She wants the power of your throne. First, she wanted to eavesdrop on all your conversations."

"And a good thing, too. I heard him plotting to overthrow you."

"Take him away!" he shouted to his guards. The Sultan married Roxelana and gave her his sacred ring, which made her the most powerful woman in the Empire.

The Purple Parrots are Gracelyn and Brian. The Blue Barracudas are Vanessa and Chris.

Roxelana wanted to marry the Sultan, but it was not easy to get the Sultan to give away his royal ring. Before each player stood the royal ring finger of Sultan Suleiman, which had a ring at the base. When Kirk gave the signal, Chris and Brian each had to grab the ring, push it up and off the finger while turning it along the way as they go up. The player to completely push the ring off the finger and put it on his head or the player furthest along in 60 seconds won. Chris placed the ring on his head with 32 seconds of spare time, awarding him a half pendant of life.

The palace that Roxelana and Suleiman lived in was called "Topkapı", and in it were a number of rooms. Here, Gracelyn and Vanessa had to follow Roxelana's path through the rooms of the Topkapı Palace. Before each player were nine fountains, each of which is named after a room in the palace. In a moment, the water will squirt in a special sequence, which the girls had to remember. What they had to do was place a marker in the first hole in that sequence. If either player is right, nothing would happen. Otherwise, she would be squirted. The player to plug the most holes won. The sequence, incidentally, was: Dining Room (hole 8), Second Court (6), Divan (7), Throne Room (5), Golden Way (3), Carriage Gate (1), Eye of the Sultan (9), Grand Salon (2), Treasury (4). Gracelyn won the game and the half pendant after correctly plugging seven fountains in the sequence while Vanessa only gotten five.

For most people, and especially for a Sultan, marriage is a very big step, like the one the teams had to take here. In the first temple game, the boys had to take the ring off the Sultan's finger, but now, all four players had to put it on Roxellana's finger at the top of the giant steps. When Kirk gave the signal, one member from each team had to boost the other up to the top of the first giant step. Once there, he/she had to turn and pull his/her partner up then start again. Once both players on either team were at the top step, they had to slip the ring onto one of Roxellana's fingers. The team to make it to the top step and slip the ring onto Roxellana's finger won. Gracelyn placed the ring on Roxellana's finger, sending her and Brian to Olmec's Temple with 1½ pendants of life.

The Temple design in this episode was very unusual since it gave more choice than most designs do. Brian volunteered to go first and chose the Crypt as his starting point. He opened the door to the Ledges when he pulled the book from the first skeleton. However, he did not think to try the other two books and instead descended into the Ledges, where Temple Guard #1 was waiting. Also, the Ledges turned out to be a dead end, which meant that he had it right all along by starting in the Crypt. But by the time he opened the door to the Troubled Bridge, only a little more than two minutes remained. He went across the bridge and got caught in the Observatory (by a Temple Guard that oddly sounded like a horse).

Gracelyn took over with about 1:50 remaining, but she did not do a good job of making up for lost time. After Brian got taken out of the temple, she did not arrive at where he left off until 23 seconds later— not very good time considering she only had to go through three rooms to get there. Along the way, she passed up a half pendant on the Troubled Bridge, which was on the actuator for the door leading into the Observatory. After she aligned the segments of the stone column, the doors leading towards the King's Storeroom and Medusa's Lair both opened, and Gracelyn smartly moved into the King's Storeroom. She completed the objective there with less than a minute left, but then she looked at the door leading into the Shrine of the Silver Monkey— which we never actually see, but can assume remained locked— and retreated into Medusa's Lair, where the final Temple Guard took her out with just 45 seconds remaining.

Now, due to the camerawork, it is also impossible to tell whether the door connecting the King's Storeroom to the Swamp had opened or not. It may have not, making the King's Storeroom a possible dead end. But no one knows for sure if it had opened or not, and if it had, Gracelyn would not have noticed anyways. All in all, the temple had a unique and challenging design, and the players could not rise to the occasion. 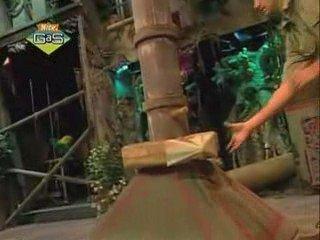 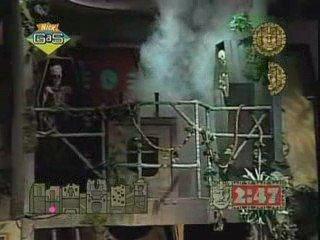