Start a Wiki
The Secret Map of the Bandit Queen is the 87th episode of Legends of the Hidden Temple.

One person on each team must push their partner, who is on top of an "ancient raft" to the other side. If the player on the raft fell off or touched their partner, they must start over.

One of the roughest and toughest outlaws of the Old West was a woman by the name of Belle Starr. Sometimes known as the Bandit Queen, Belle was born in Missouri, but soon moved West. In 1880, she married a Cherokee named Sam Starr and their cabin became an infamous hideout for outlaws, including Jesse James. Legend has it that Jesse had buried his stolen gold somewhere near Belle's cabin.

"Jesse, you'd lose your head if it wasn't glued on."

Just then, a trio of desperadoes were heard galloping towards the hideout.

"Those are my old enemies and they're after the gold, Belle. I'll throw them off the track. Remember, find that map!"

Jesse rode off with the three outlaws hot on his trail. Belle found the map, but vowed never to dig up the gold until Jesse returned. He never did and the bandit queen kept the map hidden safely away until it finally found its way to the temple.

The Red Jaguars are Jackie, a good math student and a volleyball player, and Russell, a general sports nut who especially enjoyed football. The Silver Snakes are Miriam, a basketball player who aspires to be a model, and Zachary, a soccer player and aspiring pediatrician.

Belle Starr's Cabin was a hideout for many outlaws who kept their loot in an old mine nearby. Before Russell and Zachary stood an old mine with many shafts filled with rubble. Both players found a large bag of jewels which were too heavy to carry out. When Kirk gave the signal, each player had to hook his rope onto the bag and quickly make his way out of the mine, leaving a rope trail. Once either player exited, he had to pull on the rope until he maneuvered the bag out of the mine. The player to retrieve their loot or the player furthest along in 60 seconds won. Zachary got his loot bag out of the maze with 17 seconds remaining, awarding him a half pendant of life.

The last time Belle saw Jesse, he lit out as fast as he could on his speedy horse. Before Jackie and Miriam stood a much wilder bronco which they were about to ride. When Kirk gave the signal, the bronco would start bucking. If either player fell off, her opponent would score a point. The player with the most points in 60 seconds won. Miriam beat Jackie 5-1, awarding Miriam a half pendant of life.

Belle Starr kept Jesse James's treasure map hidden. Before each team stood a large cutout of that map with a hole where the treasure is buried. When Kirk gave the signal, each team had to climb along the wall and maneuver themselves along the trail until they reach the hole so one player can pass through. The first team to reach Jesse James's gold or the team furthest along in 60 seconds won. The Red Jaguars made it to the hole with 22 seconds remaining, awarding them a full pendant of life, leading to a tie.

Olmec: "In return for finding his map, did Jesse offer Belle half his gold…?" Zachary rang in and correctly answered "half of the reward--or half of the treasure--the gold", sending him and Miriam to Olmec's Temple in search of the secret map. They then hug.

Miriam started off at a good speed through the rooms, but got caught in the Tomb of the Headless Kings. Inside the Jester's Court, she wasted some time by receding back into the Tomb of the Headless Kings after her already-too-long struggle completing the objective. She was taken out in the Dark Forest with little more than a minute remaining, when Zac literally raced into the temple. He flew through the temple to the point of his partner's departure, and then busted through the Stone Wall into the Quicksand Bog, climbed the Pharaoh's Secret Passage, said the password, grabbed the map, and raced back to the gate with nine seconds to spare. They earned themselves a trip to Santa Monica. 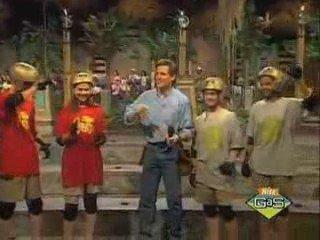 Zac Turney on Legends of the Hidden Temple Part 1 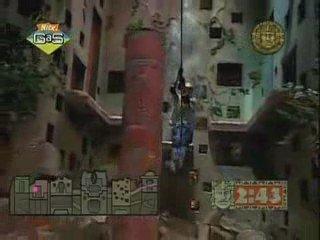 Retrieved from "https://legends.fandom.com/wiki/The_Secret_Map_of_the_Bandit_Queen?oldid=29016"
Community content is available under CC-BY-SA unless otherwise noted.