Start a Wiki
The Silver Horseshoe of Butch Cassidy is the 41st episode of Legends of the Hidden Temple. It was the 67th episode to air.

The moat crossing required players to hang from a rope overhead and walking across two lower ropes which crisscross at the halfway mark.

The wiliest gentlemen outlaws in the Old West were Butch Cassidy and the Sundance Kid. Together with the Hole in the Wall Gang, they robbed trains, banks, and stages without ever killing anyone. They planned their robberies carefully, and always had fresh horses concealed along their escape route, so they could elude any posse that chased them. They were also especially polite to ladies. Legend has it that one day, Butch was robbing a train, and a beautiful young woman recognized him.

"You're Butch Cassidy, aren't you?"

He blushed, and lowered the bandana which hid his face.

"Can I have your autograph?"

"Can't write, but I do have a calling card."

And he handed her a silver horseshoe engraved with his initials. She treasured that horseshoe all her life, but it disappeared.

The Orange Iguanas are Paula, who plays the violin and loves horses, and Matt, who runs long distances. The Purple Parrots are 12-year-old Wendy, who paints and makes crafts (she had her painting of a toucan in the Orlando Art Museum), and 11-year-old Terry, who survived being pulled under a four-foot wave.

Butch Cassidy and the Sundance Kid robbed their way all across the west while at the same time, avoiding the law. When Kirk gave the signal, Terry and Paula had to crawl to the first block, grab the first bag of gold, crawl back to their starting block, drop it in their basket, and repeat the process with the next starting block and bag of gold. Moving back and forth, they had to avoid the swinging sandbags. If either player touched any of the swinging sandbags, they had to go back to their starting block and try again. The player with all of their bags of gold in his/her basket or the player further along in 60 seconds won. Terry beat Paula having collected three bags while she collected two bags, awarding him a half pendant of life.

For Butch and Sundance, a successful robbery might gain them a lot of gold. There is a ton of gold ripe for the picking laid out on the boards before Matt and Wendy. When Kirk gave the signal, they had to run to the gold, jump up, grab one piece each rotation, and drop it in their bins. The player with the most gold in their buckets at the end of 60 seconds won. Wendy won the game after dropping three pieces of gold, over Matt who only had two, just like her partner Terry beat Matt's partner, Paula in the previous temple game. She won a half pendant of life.

Butch Cassidy and the Sundance Kid stowed fresh getaway horses along their escape route, so they could outrun a posse, and folks say they can jump from horse to horse without even stopping. Fortunately for the two teams, their task is to stay on only one horse as long as possible. When Kirk gave the signal, the horses started to spin, and all the players needed were a very tight grip on their team's horse. The team with one or both players on the horse at the end of 60 seconds won. Terry fell off while Wendy and both Orange Iguanas held tight. Both Orange Iguanas stayed on until their 60 seconds were up, awarding them a full pendant of life, leading to a tie.

Olmec: "Which of these was a fast and famous mail service of the Old West—?" Matt correctly answered "Pony Express", sending him and Paula to Olmec's Temple in search of the silver horseshoe.

Paula went into the Ledges at a moderately fast pace then climbed up the wall to the Heart Room. She then descended to the Throne Room and crawled into the Swamp. After the Swamp, Paula went into the Dark Forest where she got caught by a temple guard (spirit). She then busted through the Stone Wall and ascended in the slow slow Mine Shaft elevator. She then grabbed the horseshoe in the Viper's Nest with about 1:20 and raced through the top floor like she only had ten seconds left. She then jumped back into the Pit of Despair and climbed back through the Ledges and won with 52 seconds remaining. 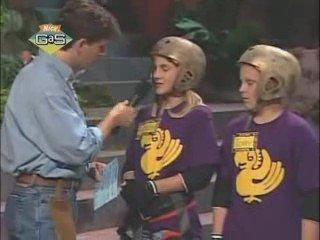 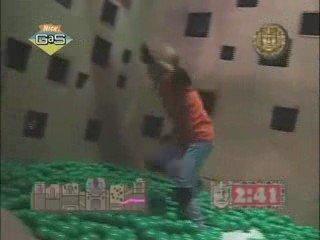 Retrieved from "https://legends.fandom.com/wiki/The_Silver_Horseshoe_of_Butch_Cassidy?oldid=28985"
Community content is available under CC-BY-SA unless otherwise noted.