Start a Wiki
The Stone Head of the Evil King is the 52nd episode of Legends of the Hidden Temple.

In this extraordinarily difficult moat crossing, one player holds a long wooden plank steady as the other crosses it. After one teammate is across, he or she holds the board for the other partner to do the same.

One of the greatest heroes of Greek mythology was the young adventurer Perseus. To save his mother from a forced marriage to an evil king, Perseus agreed to kill Medusa. Medusa was an ugly monster with hair made of live snakes. Everyone who looked at her turned to stone, and the king knew he was sending Perseus to his death.

"No problem," said Perseus, and off he went to Medusa's cave.

Watching her reflection in his shield, Perseus lopped off her hideous head and took it back to the king as proof. According to legend, the surprised king looked at the head of Medusa and turned to stone. The wedding was off, and Perseus had the stone king reduced to rubble, all except the head.

The Blue Barracudas are Tony and Heather. The Silver Snakes are Chris and Kristin.

According to myth, when Medusa died, a beautiful winged horse called Pegasus sprang from her neck. Before Chris and Heather stood Pegasus's head. When Kirk gave the signal, each player had to grab a wing, shimmy up his backbone, and place the wing on his shoulder. As Pegasus is uncomfortable when mounted by strangers, he would spit at the players. The player to place both wings on Pegasus's shoulders or the player furthest along in 60 seconds won. Heather was able to place her second wing before Chris with 32 seconds remaining, earning the Blue Barracudas the Half Pendant of Life.

Athena helped Perseus with his quest. So in thanks, Perseus brought Medusa's head up to Mount Olympus and gave it to her. Before Kristin and Tony stood a mountain with many holes into which their pegs fit. When Kirk gave the signal, each player had to grab their sack containing Medusa's head, climb the mountain by placing the pegs in the holes, and place sack on Athena's shield. The player to hang Medusa's head on Athena's shield or the player furthest along in 60 seconds won. Although neither player managed to hang the bag on the shield, Tony was ruled to be further along because he was in the process of hanging the sack on shield.

When Perseus returned and found the royal wedding in progress, he showed the head of Medusa to the evil king and turned him to stone. The teams' task was to finish the job by knocking the statue of the stone king down. When Kirk gave the signal, one player had to load their slingshot and launch the ball at one of the statues on the wall. Once the ball is launched, it was his/her partner's turn to do the same. The team to knock down all four statues or the team furthest along in 60 seconds won. The Blue Barracudas won the game and the full pendant after knocking down three statues down, while the Silver Snakes only managed to knocked down two, Sending the Blue Barracudas to Olmec's Temple with two full pendants. The Silver Snakes did not win any pendants.

Heather went first and started by going up into the Crypt, but she failed to pull all three books. After trying only two (she never tried the one left of the Temple Guard door), she descended into the Ledges and then went directly for the artifact, hitting a Temple Guard in the Throne Room along the way. She was scared quite a bit by the guard and the door into the Swamp obviously did not open, so the guard himself had to finally show her she could go up into Medusa's Lair, where she ended up being taken out with 2:09 remaining.

Tony directly followed Heather's path to Medusa's Lair (Including unnecessarily entering the Crypt). He had the worst time in Medusa's Lair; at this point in the show's run, a player had to put four snakes into Medusa's head to complete the objective. He entered Medusa's Lair with 1:30 on the clock, but when he left, only eighteen seconds remained. He met the third Temple Guard in the King's Storeroom, then held each pot from the top with one hand and shattered them from the side with the other, which sent the key flying. He broke all three pots, but time ran out before he could find the key. This was another episode that proves that the Temple is a different animal from any of the other challenges. 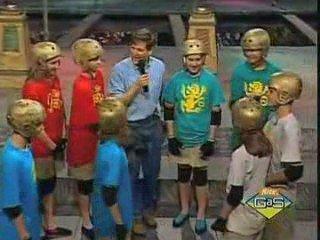 The Stone Head of the Evil King Part 1 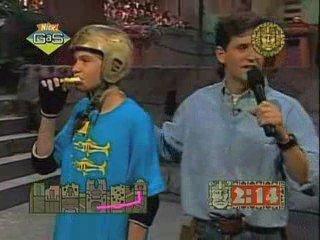 Retrieved from "https://legends.fandom.com/wiki/The_Stone_Head_of_the_Evil_King?oldid=29370"
Community content is available under CC-BY-SA unless otherwise noted.