Start a Wiki
The War Fan of the 47 Rōnin is the 83rd episode of Legends of the Hidden Temple.

In this Moat Crossing, players had to walk across these swinging platforms at the same time, and teams all did very well. The Blue Barracudas, Green Monkeys, Red Jaguars and Silver Snakes were the first four teams to hit their gongs.

Some of the boldest and most cunning warriors of Old Japan were the 47 Ronin. As Lord Asano's bodyguards, they accompanied him to the Palace of the Shogun, the ruler of Japan, but somehow, the evil Lord Kira still managed to do away with Asano. Kobayashi, number one samurai, called the others together.

"Boys, we messed up big time... and you know what that means."

"That too, but now we are rōnin— outcasts; we must find a way to get even." But Lord Kira was ready.

"Double the walls, triple my guards, cancel my dental appointment— the rōnin are on the Warpath!"

For two years, Lord Kira waited for their attack, but the 47 Rōnin were secretly plotting their revenge. Finally, Kira relaxed.

The next night, The Rōnin crept across the snow. They fought valiantly through the guards and found Kira hiding in a bathroom. They did away with the evil lord, then surrendered to the Shogun. But instead of punishing them, he ordered their story be painted onto a war fan.

The 47 Rōnin sneaked up to Lord Kira's castle and overcame the guards. Before Joe and Jeremy stood Lord Kira's castle, which they had to infiltrate from below. When Kirk gave the signal, each player had to launch himself through the webbing, climb through, and throw the samurai back down through the hole. Once done, he had to go onto the next level and do it again. When either player reached the top, he had to throw the warrior through the hole and ring the gong. The player to ring the gong in 60 seconds won. Jeremy rang the gong with 36 seconds remaining, awarding him a half Pendant of Life.

Some Japanese gardens are made not of plants, but sand and rocks which are valued for their interesting shapes or colors. While the Rōnin were plotting their revenge, they often passed secret messages to each other by hiding them under garden rocks. Before Jillion and Elise were a tunneled garden filled with colored rocks. When Kirk gave the signal, each player had to crawl through the tunnel, pop through the hole, and grab the rock she found there. After that, she had to go on to the next hole. If the rock there matched the one she already had, she had to bring them back and drop them in her bin. If the rock did not match, she had to swap the one she already had with the one she found and go on to the next hole. The player with the most pairs in her bin in 60 seconds won. Elise only managed to find one pair, awarding her a half Pendant of Life. Jillion was unable to find any pairs.

Olmec: "Samurai always wore two of these weapons: Slingshots…" Jeremy rang in before Olmec could finish, but he was correct when he answered "Swords", sending him and Elise to Olmec's Temple in search of the war fan.

Jeremy was a fast and smart player, but one accidental move on his part cost the team dearly. He started by going up into the Crypt, where he immediately lost the team's only Pendant of Life to a Temple Guard. From there, he headed into the Pit of the Pendulum, and then into the Tomb of the Headless Kings. He pulled all the ropes in the room fairly quickly, but as he was doing so, he accidentally kicked the Pit door shut. After a bit of trouble finding the skull, he placed it on both kings, with the stage-left king being the correct choice. From there, he went up into the Chamber of the Sacred Markers and then straight across the top floor. He got luck in the Room of the Ancient Warriors and acted fast in the Shrine of the Silver Monkey, but he was taken out one room away from the War Fan, in the Room of the Secret Password with 1:06 on the clock.

Elise launched into the Temple and made great time at first, but she soon met the Tomb door Jeremy had kicked shut earlier. It was jammed shut when she got there with fifty seconds remaining, and it took 22 seconds for the door to be reopened by the crew. Time ran out right after she entered the Room of the Secret Password (where Kirk was telling her to "slide down"— possibly because players did not need to complete the room objective to progress downward from that room space for most of Season 1 and all of Season 2). 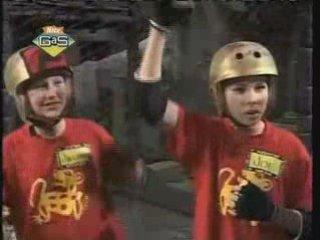 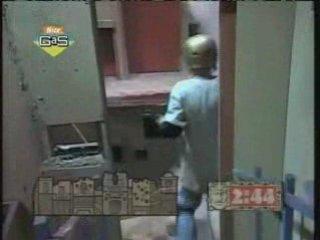 Retrieved from "https://legends.fandom.com/wiki/The_War_Fan_of_the_47_R%C5%8Dnin?oldid=28720"
Community content is available under CC-BY-SA unless otherwise noted.